There’s a reason why California is mentioned in just about every song under the sun. From legendary artists like Led Zeppelin, The Beach Boys and The Eagles to modern pop-culture icons like Katy Perry and John Mayer, many have crooned about California’s golden coasts and carefree lifestyle. And people listened. In fact, so many people listened that California is the most populous state in the nation, followed by Texas and Florida.

Apart from the epicenter of the United States movie industry in Los Angeles and tech innovations in the Bay Area, California is home to plenty of other benefits that draw in residents each year (including both a booming economy and over 258 days of sunshine). But life in La La Land isn’t all palm trees and celebrity sightings — occasional bad weather events can cause homes throughout California to need repairs. Luckily, getting the needed protection isn’t complicated.

In addition to the government programs set up in the state, there are also plenty of independent insurance companies offering comprehensive policies to get Californians covered. Below, we break down what you need to know about home insurance and just how Hippo can help.

How much is homeowners insurance in California? 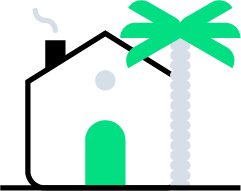 The average home insurance premium in California is $1,133. You can thank that gorgeous, year-round weather for lower premiums than the rest of the country, as many other states pay at least $1,200 a year, if not more. Just another reason why California is so popular.

The average home insurance premium in California is about $70 less than the national average — or, about the cost of a ticket to watch the Dodgers swing for the fences.

Once you’ve closed on the perfect home nestled in the Napa Valley Wine Region or just a few blocks away from Santa Monica State Beach, you may be wondering exactly what you’ll pay for home insurance. And the answer is: it depends.

While we mentioned above that the average California insurance premium is a little over $1,000, that value can vary. You’ll want to speak with an insurance agent to get an accurate estimate, but you can expect things like the age of your home, your home’s location and proximity to flood zones or fault lines to affect your overall cost. To see what you'd pay for home insurance in San Diego, check out our guide.

What does California home insurance cover?

You wouldn’t head off for a hike at Yosemite National Park without hiking boots, a map and a camera. Think of home insurance the same way — you want to be prepared. A comprehensive policy will cover your home’s dwelling, your belongings, your liability and even additional living expenses. Once you have all these things, you can rest easy knowing you are fully protected and head off to take in the sights without a care in the world.

But if you notice the precipitation you feel isn’t spray from one of Yosemite’s iconic waterfalls, but instead from a storm brewing on the horizon, you might start to wonder if you’re as prepared as you thought. That’s where insurance riders come in, acting like a raincoat to provide extra coverage when needed. You can add riders to your policy for more protection from common weather events in your area such as wildfires, floods and earthquakes. Learn what specific supplemental insurance needs California has on our blog.

While home insurance premiums are already pretty low in California, the cost of living is rather high. Being home to everyone from the eccentric Real Housewives of Beverly Hills to tech behemoths like Netflix and Apple, California is the third most expensive state to live in. Because of this, it’s no surprise that residents want to save money wherever they can. And when it comes to your homeowners insurance bill, you have a few options.

First, you can install smart home devices, as many companies will offer discounts for homes with security cameras and water leak detectors. You can also replace your roof if it’s 20 years or older, and make sure to conduct regular home maintenance to keep your home in premium condition.

California, being one of the most progressive states in the country, has several programs to help ensure it’s residents get the protection they need. These include Fair Access to Insurance Requirements Plan (FAIR) and the National Flood Insurance Program (NFIP). Below is a breakdown of how these resources can help residents of The Golden State, but for even more information about homeowners coverage in California, reach out to the California Department of Insurance.

FAIR helps homeowners that don’t qualify for traditional home insurance policies, such as those that live in a high-risk area or have a long history of claims. Though FAIR can be helpful, their coverage is often extremely limited. That’s why a FAIR Plan should be a last resort if you cannot find a policy anywhere else.

The NFIP has been protecting the United States from flood damage for over 50 years. And given how many California residents live on the coast, the potential for water damage from flooding, hurricanes and other natural disasters is rather high. In fact, 99% of California communities take advantage of the NFIP to ensure they get the help they need should their homes flood.

With so much culture to experience, you don’t want to jump through hoops to get your home covered. That’s why Hippo can get you, well, “In-N-Out,” by providing a home insurance quote in just 60 seconds.

Learn More About Homeowners Insurance In Your Area

How Much Does Homeowners Insurance Cost?

How to Buy Homeowners Insurance

How Much Homeowners Insurance Do I Need?